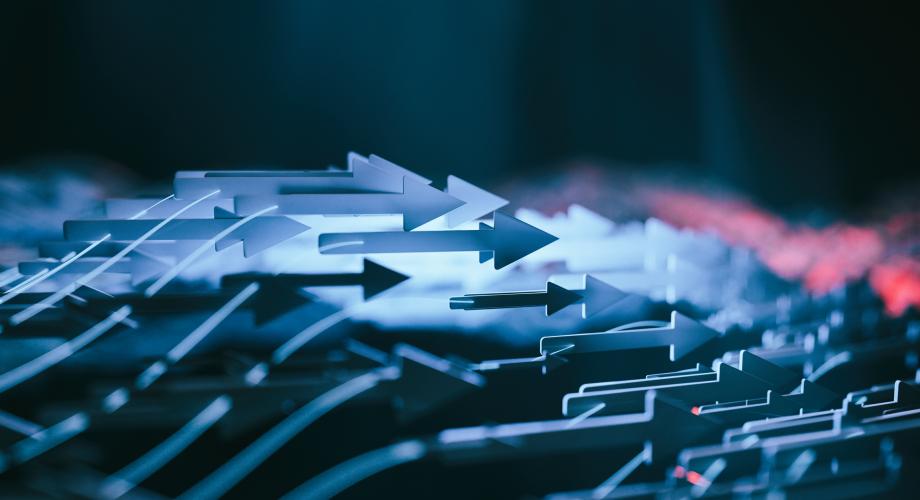 Inflation surprised in a pleasant way, rising 8.5% year-over-year, below consensus forecasts. Prices were flat on a monthly basis, the best reading since May 2020 when they were actually dropping. The breather in price hikes was due to energy prices, which fell 4.6% over the month. Food prices continued to climb, however, notching another increase in excess of 1.0%. Core CPI rose 0.3% over the month, slower than the prior 3 months, but disturbingly high for prices that are considered to be more “sticky.” The largest increases in core CPI were car insurance (1.3%), car maintenance and repair (1.1%), and rent (0.7%). 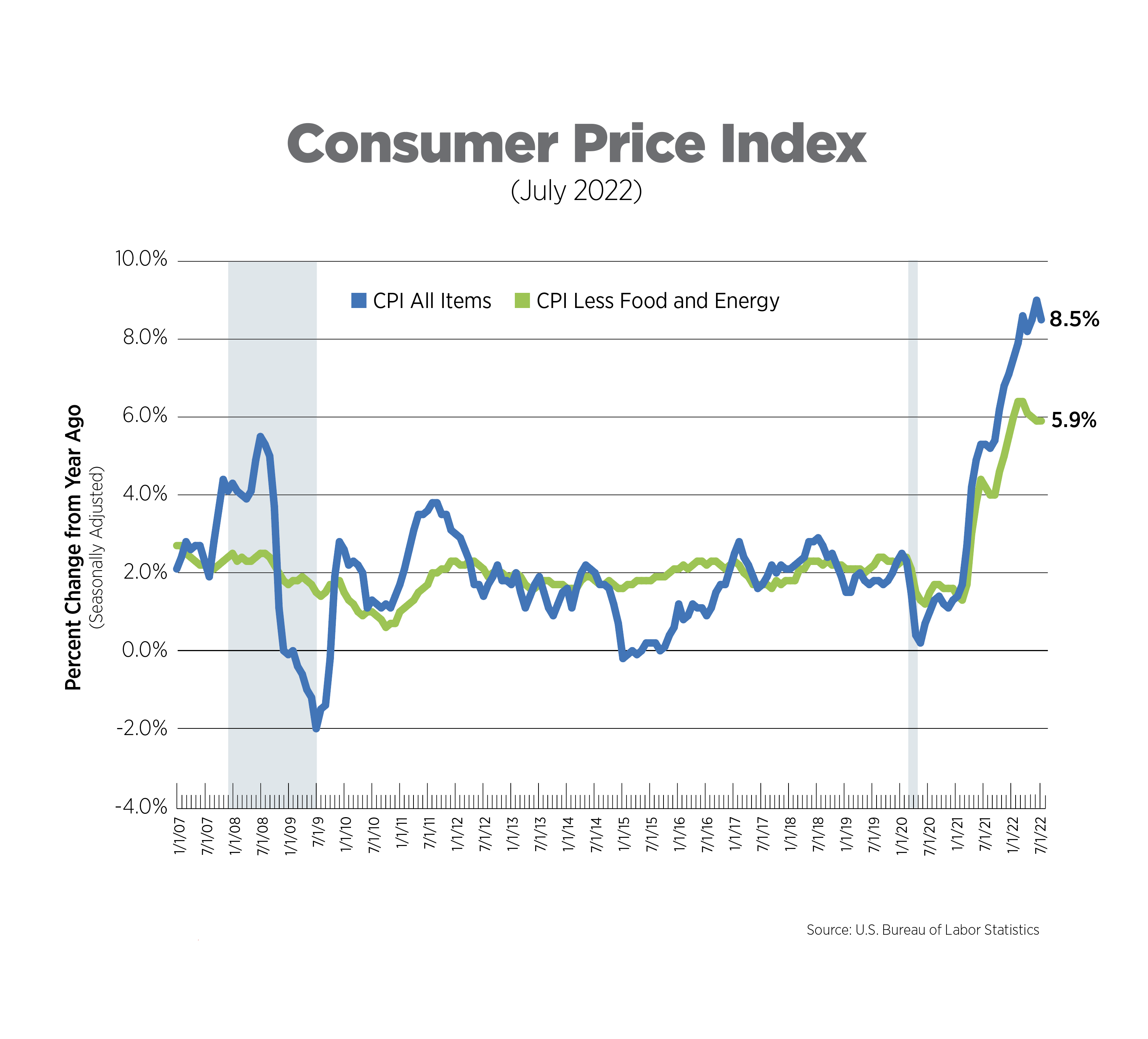 The CPI includes two measures for shelter costs: owners’ equivalent rent and rent of primary residence, both of which are self-reported. Together, they comprise about one-third of CPI. Owners’ equivalent rent, which is the price owner-occupiers think they could attain if they rented their homes, increased 5.8% while rent of primary residence was up 6.3% year-over-year, another 36-year high. It’s important to note that both measures lag actual changes in housing costs as the data are collected less frequently than other components of the CPI, so their peak has likely yet to be seen. Private sector sources for rent, which often only include new leases in larger, professionally managed properties, averaged about 12% year-over-year, in June and July. 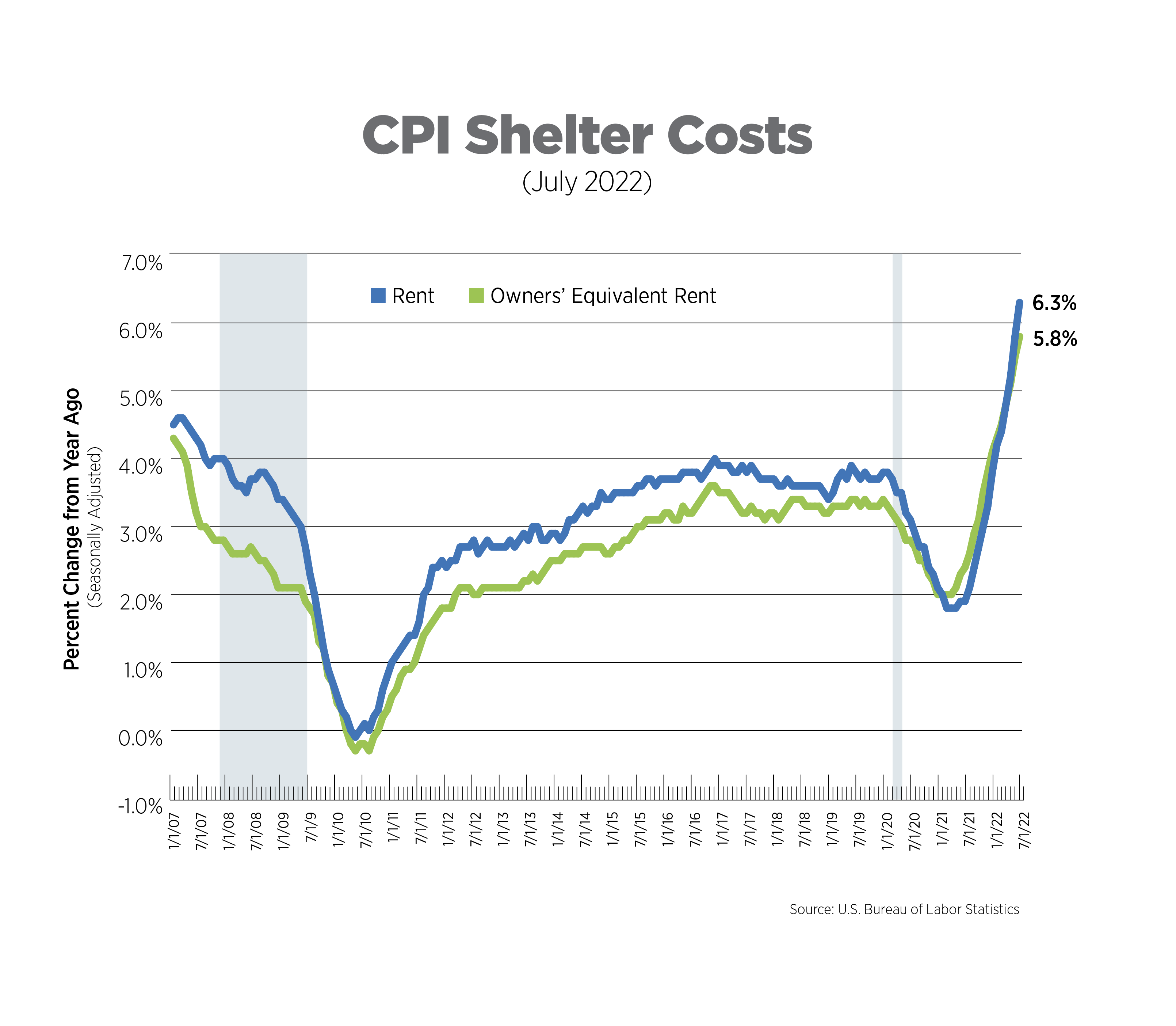 The core (excluding food and energy) PCE receded from its 40-year highs earlier this year, but ticked up slightly, remaining elevated at 4.8% year-over-year. On a monthly basis, prices jumped 0.6%, the highest level in more than a year and certainly unsettling for the Fed. Motor vehicles and parts, as well as housing and utilities costs, have been consistently responsible for the greatest price increases. 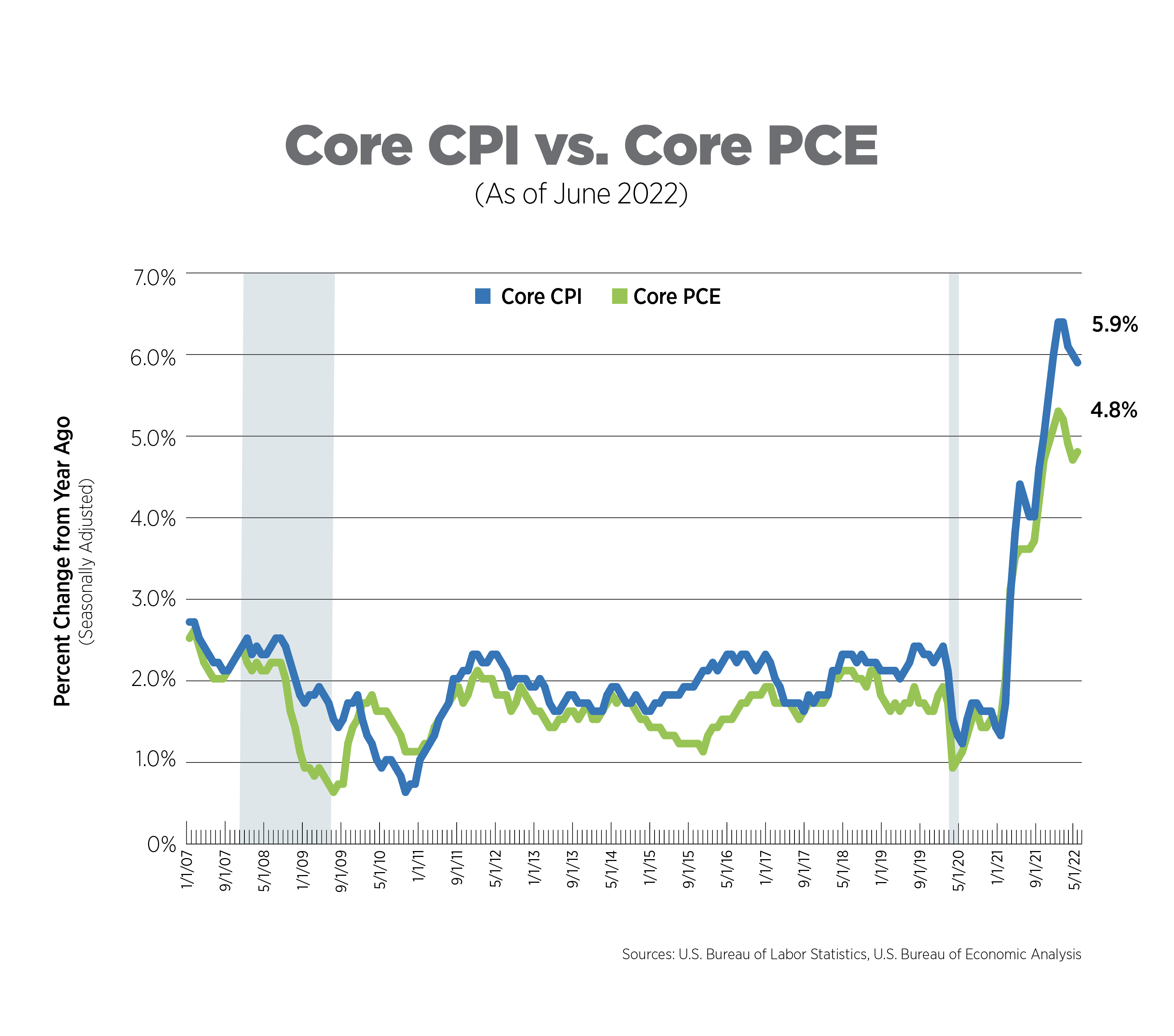 The University of Michigan’s measure has declined slightly over the past 3 months as consumers see some relief at the gas pump. The bond market measure shows that investors are expecting lower rates of inflation in the long term compared to recent months. Other measures of inflation expectations, such as the New York Fed’s Survey of Consumer Expectations, showed even sharper declines in July. 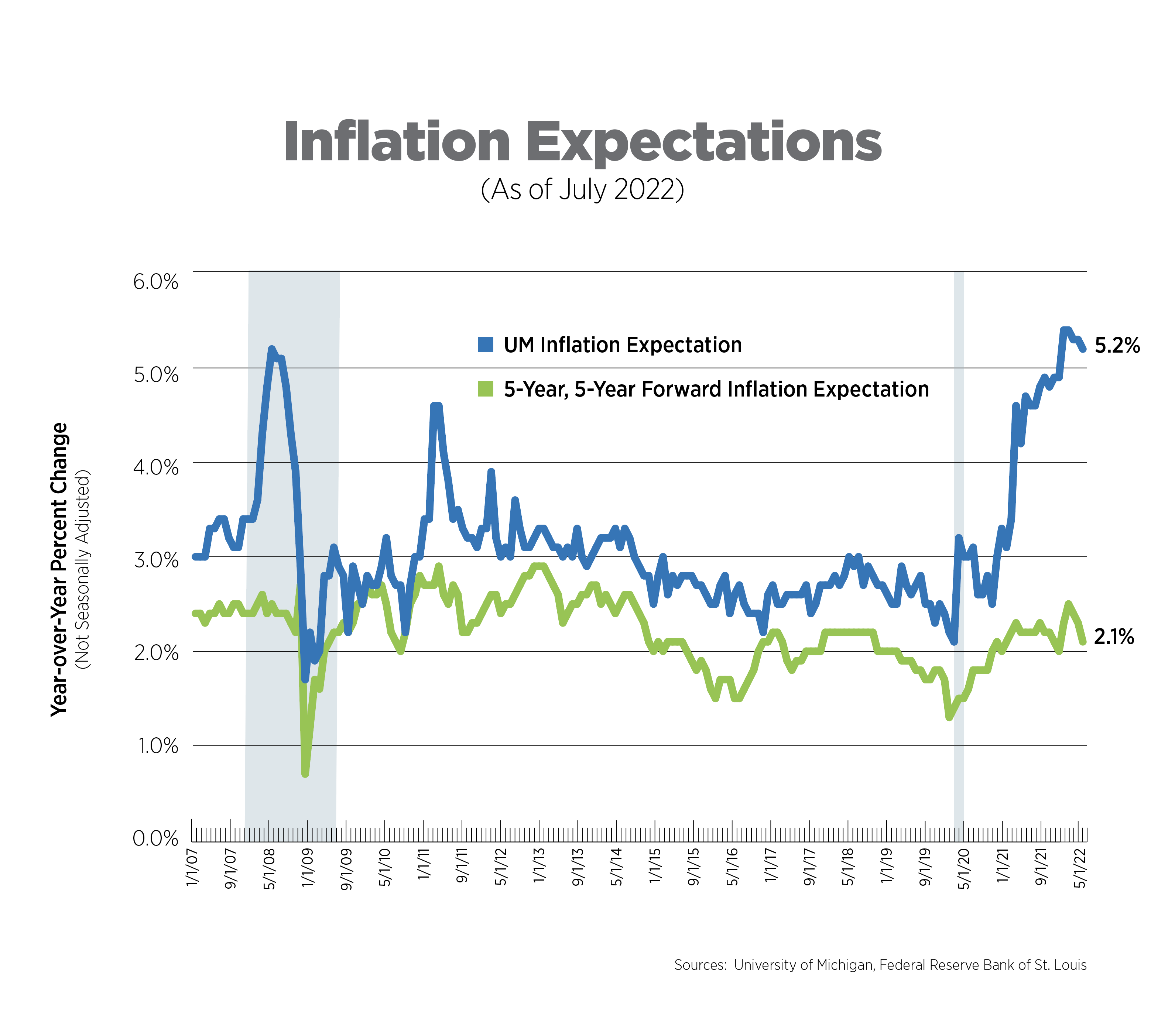 The ECI for private sector workers surged to a 5.5% year-over-year increase last quarter, the highest rate since 1984. All components of the index: wages, compensation and benefits, continued to experience healthy gains, although benefits cost growth slowed down somewhat from the prior quarter. While some firms have announced layoffs or hiring freezes, the vast majority continue to add to their payrolls, as evidenced by July’s stellar jobs report. Until the labor market cools down, employment costs will remain well above average. 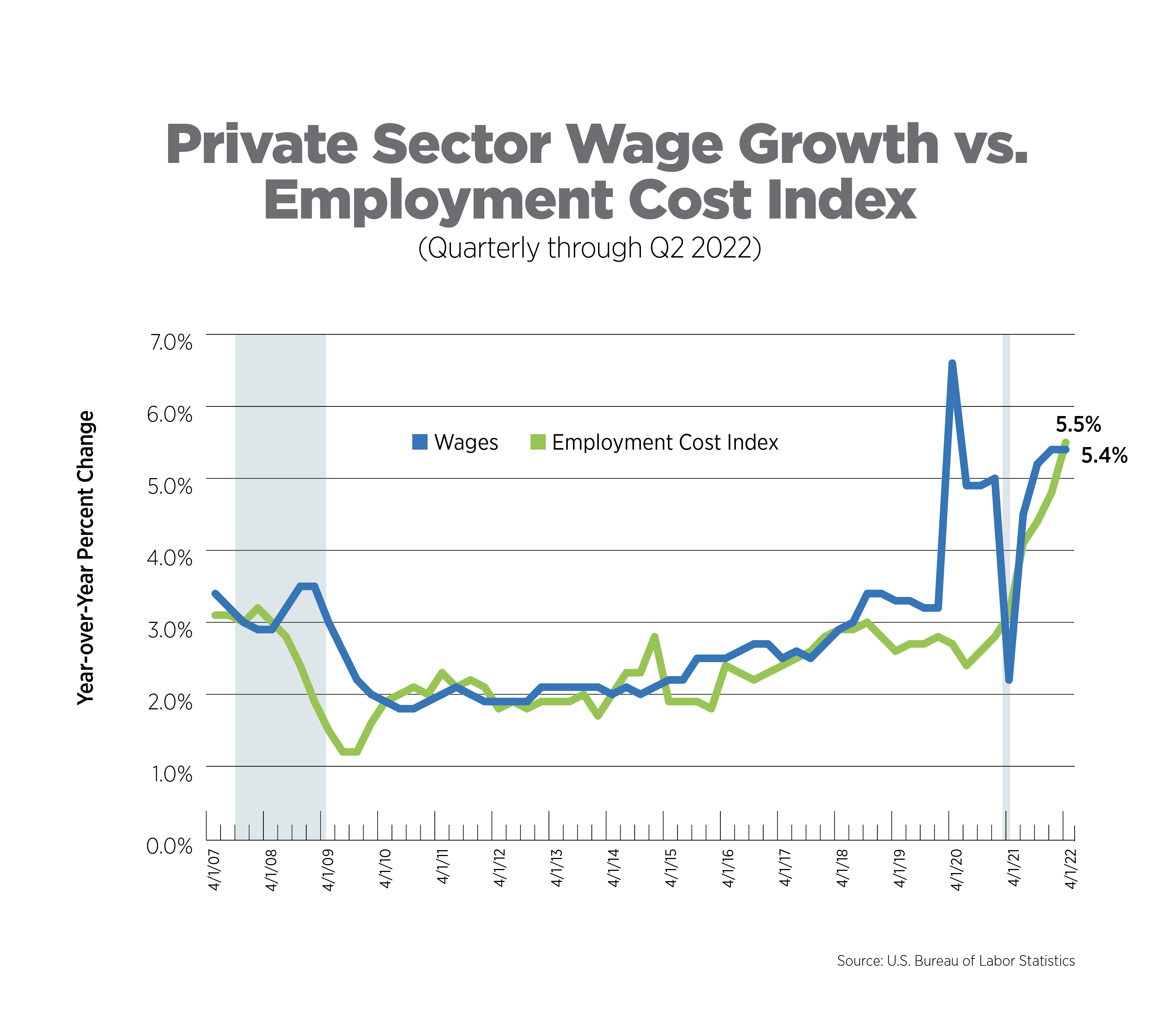