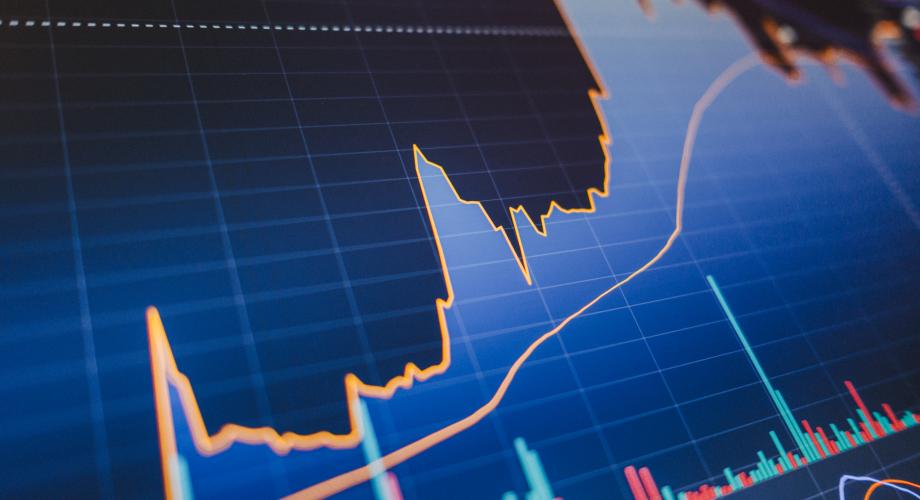 Inflation ran higher than the consensus forecast, which called for a slight monthly decline in headline CPI and a 0.3% increase in core CPI. Instead, headline CPI rose 0.1%, despite the continued decline of gas prices; core CPI rose 0.6%, double last month’s increase. On a year-over-year basis, consumer prices increased 8.3% and 6.3%, respectively. Core CPI categories experiencing the largest monthly increases were car maintenance and repairs (1.7%) and car insurance (1.3%). Conversely, airfares dropped 4.6% and used cars and trucks fell 0.1%. This month’s report fell in line with the Fed’s expectations that it will need to continue aggressive interest rate hikes to bring inflation down to its target range. 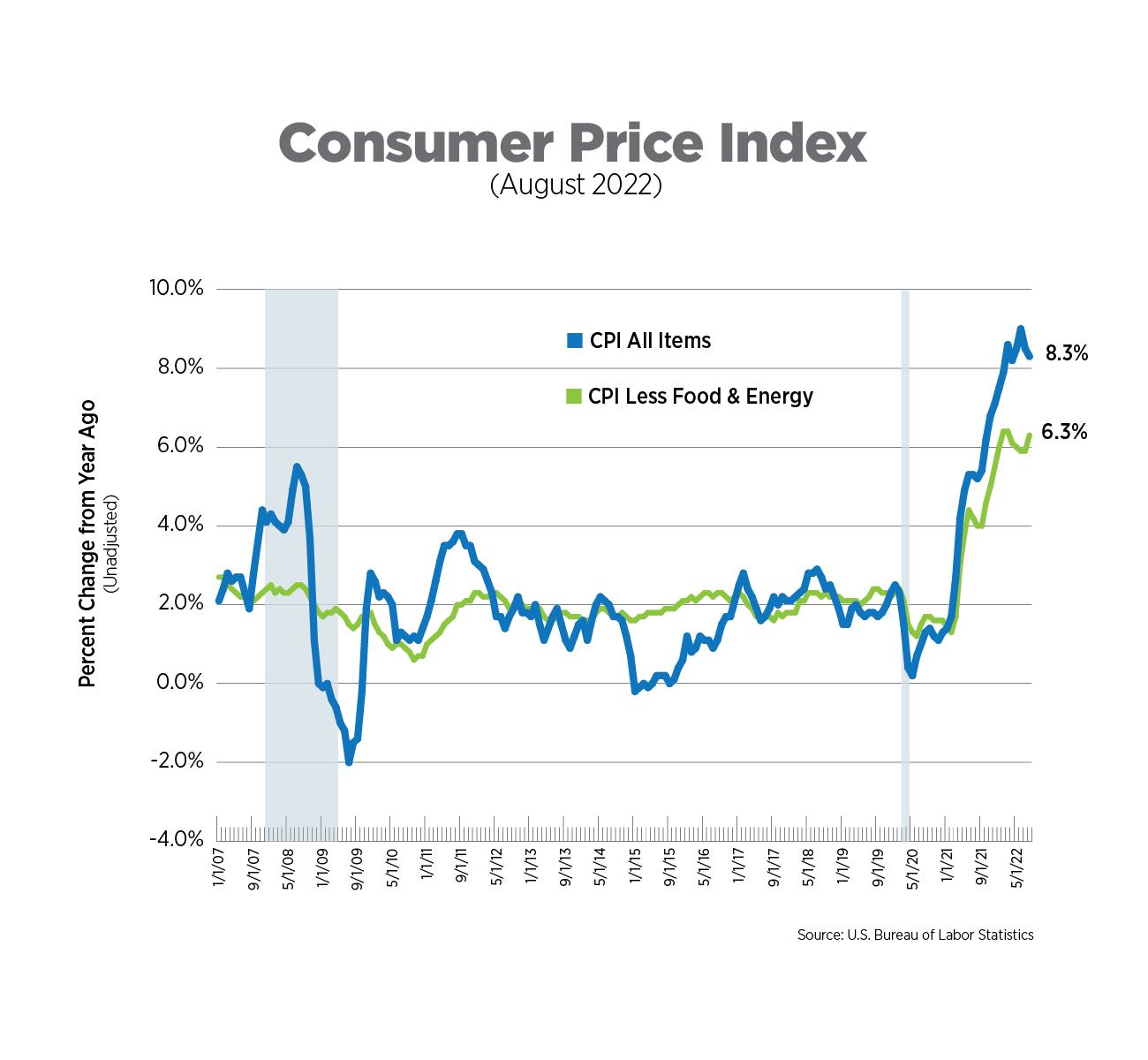 The CPI includes two measures for shelter costs: owners’ equivalent rent and rent of primary residence, both of which are self-reported. Together, they comprise about one-third of CPI. Owners’ equivalent rent, which is the price owner-occupiers think they could attain if they rented their homes, increased 6.3% while rent of primary residence rose 6.7%. Both measures are now at their highest levels since 1986. Private sector measures of apartment rents showed moderation in August, with 0.4% growth month-over-month according to RealPage, and slight declines reported by both CoStar and Yardi Matrix. 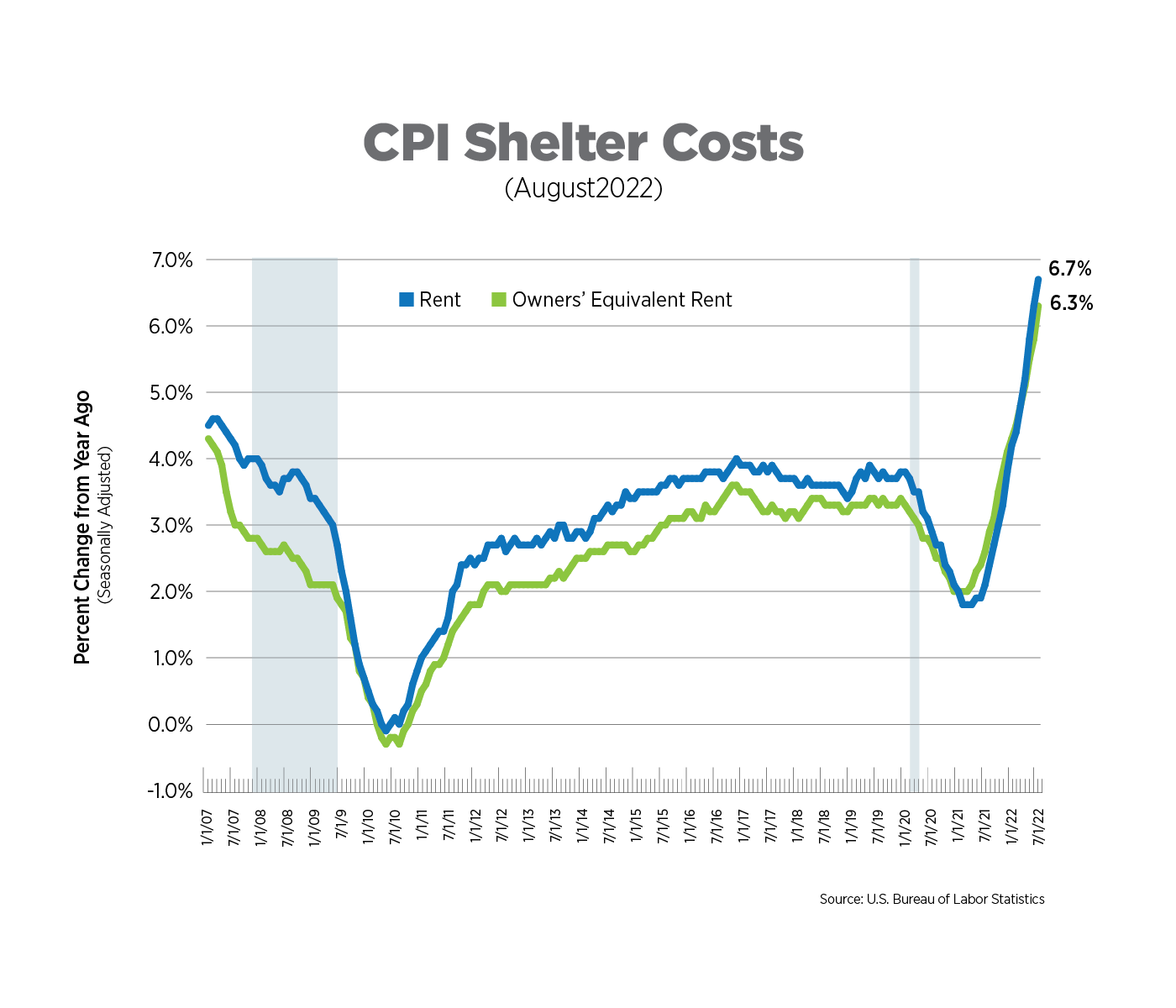 The core (excluding food and energy) PCE declined for the fifth consecutive month, measuring 4.6% year-over-year in July. Prices rose .08% since June, the lowest rate of increase since November 2020, and prices for all goods, including food and energy, actually contracted. Prices for durable goods dropped 0.2% and services prices increased just 0.1%, after a 0.7% jump in June. While it is a step in the right direction, the Fed will need to see price growth flatten or decline for an extended period of time before it alters its policy path. 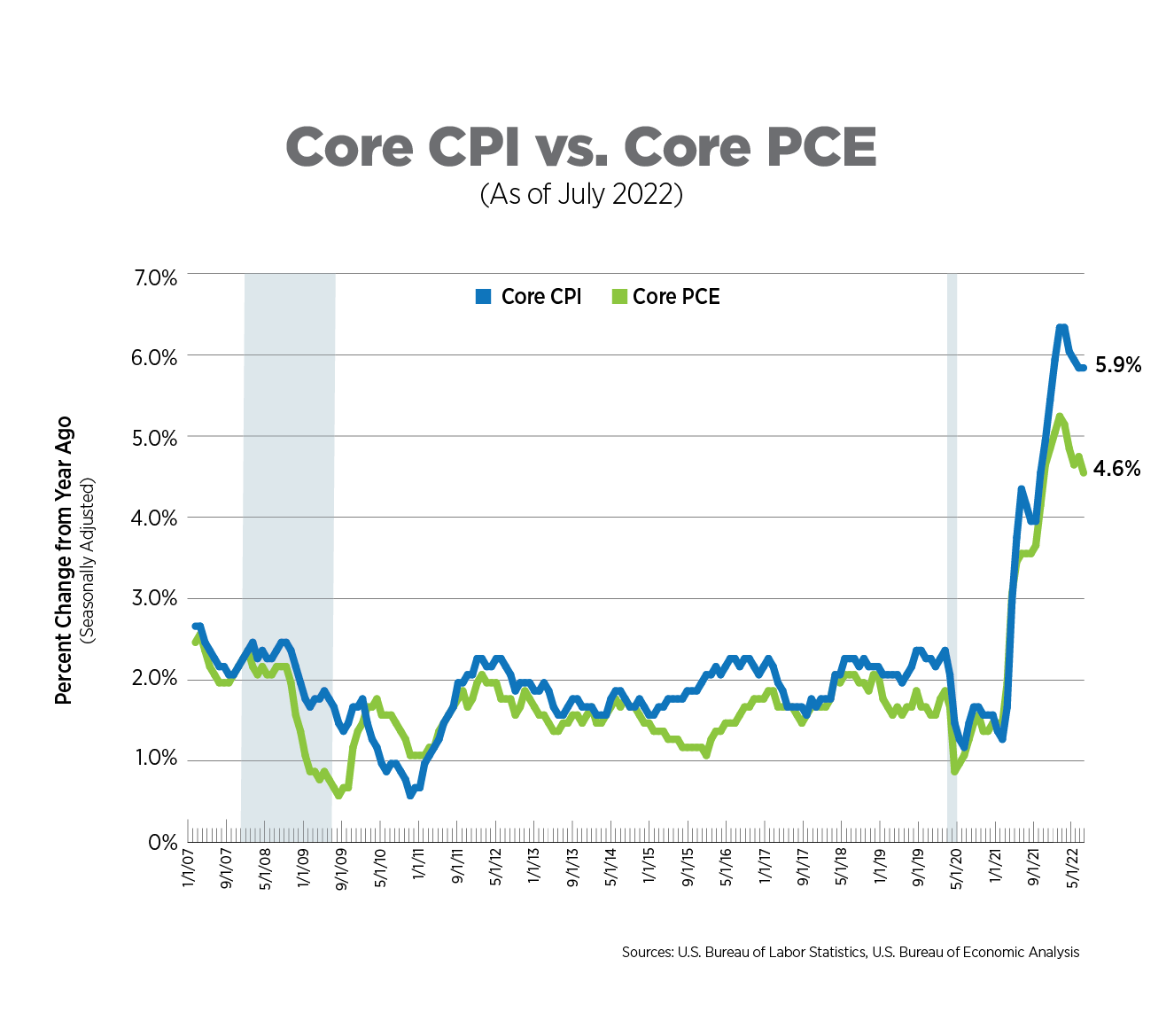 The one-year expectation for inflation remained elevated in July at 6.2%. Expectations for inflation 3 years from now appear to have peaked at 4.2% in October 2021 and have declined dramatically since May, largely due to recent drops in gas prices. 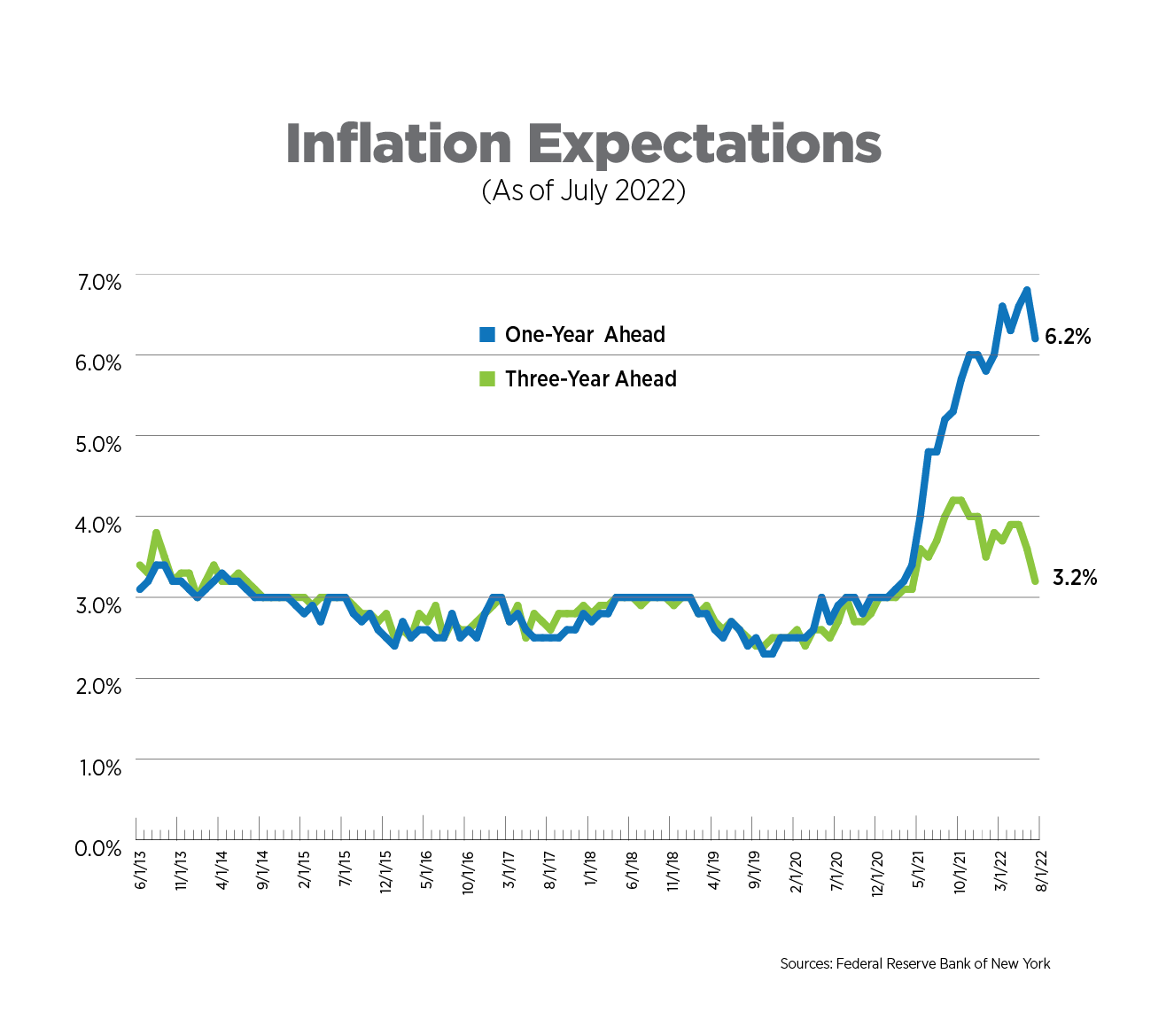 Wage growth has decelerated slightly, averaging 5.2% year-over-year for the past 3 months. On a monthly basis, wages grew just 0.3%. Leisure and hospitality workers saw their wages beat inflation, increasing 8.6% on an annual basis. Wages in the information sector, which includes the tech industry, increased 6.0% while education and healthcare jobs rose 5.9%. Financial activities, which include the real estate sector, posted a 4.2% increase, up from a pandemic low of 2.7% in May. 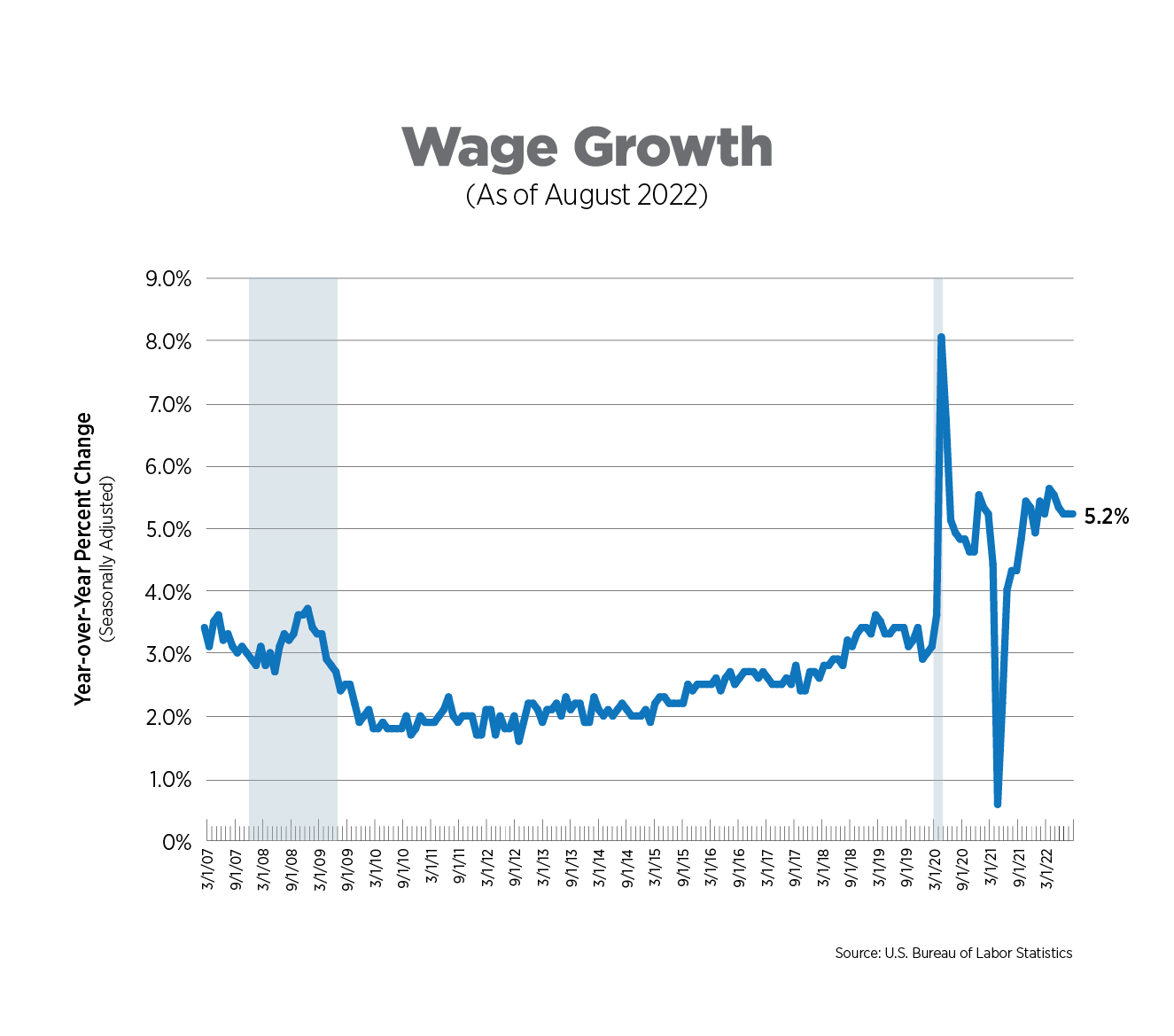