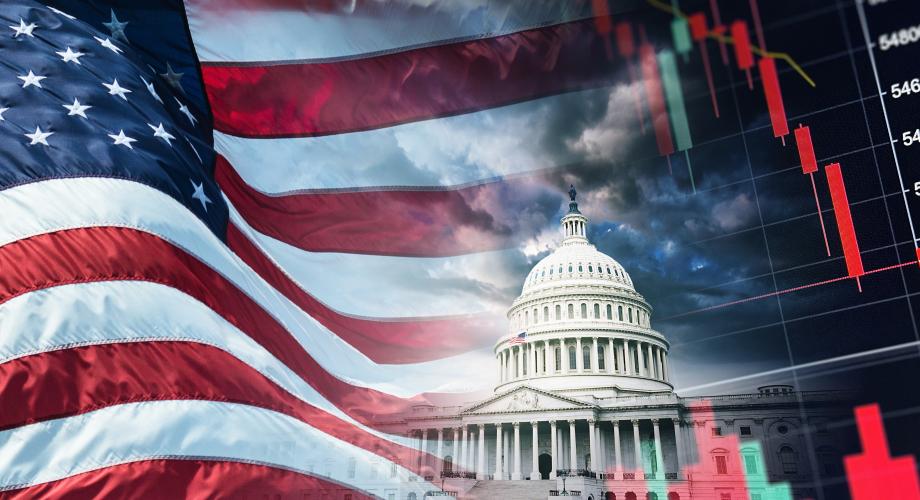 Inflation came in lower than expected, rising 7.8% year-over-year, seasonally adjusted. This was the lowest rate of increase since January. On a monthly basis, prices rose 0.4%, matching September’s level. Consumers saw some relief on the food front, with prices rising 0.6%, the slowest pace in nearly a year.

Core inflation (excluding the volatile food and energy sectors) remained high at 6.3% but grew at half the pace of last month. Sectors experiencing significant declines were used cars and trucks (-2.4%), airline fares (-1.1%) and apparel (-0.7%).  Inflation is heading in the right direction, but as long as the labor market is showing more signs of growth than signs of contracting, the Fed will continue to tighten monetary policy.

The CPI includes two measures for shelter costs: owners’ equivalent rent and rent of primary residence, both of which are self-reported. Together, they comprise about one-third of CPI. Owners’ equivalent rent, which is the price owner-occupiers think they could attain if they rented their homes, increased 6.9% year-over-year, the highest level since the BLS started tracking the data in 1983. Rent of primary residence rose 7.5% and is now at a 40-year high. The continued escalation of both measures was expected given the lag in data collection.  According to RealPage, rents fell by 0.6%, the highest level since the peak pandemic months of April and May 2020, and the largest in 12 years for the month of October. 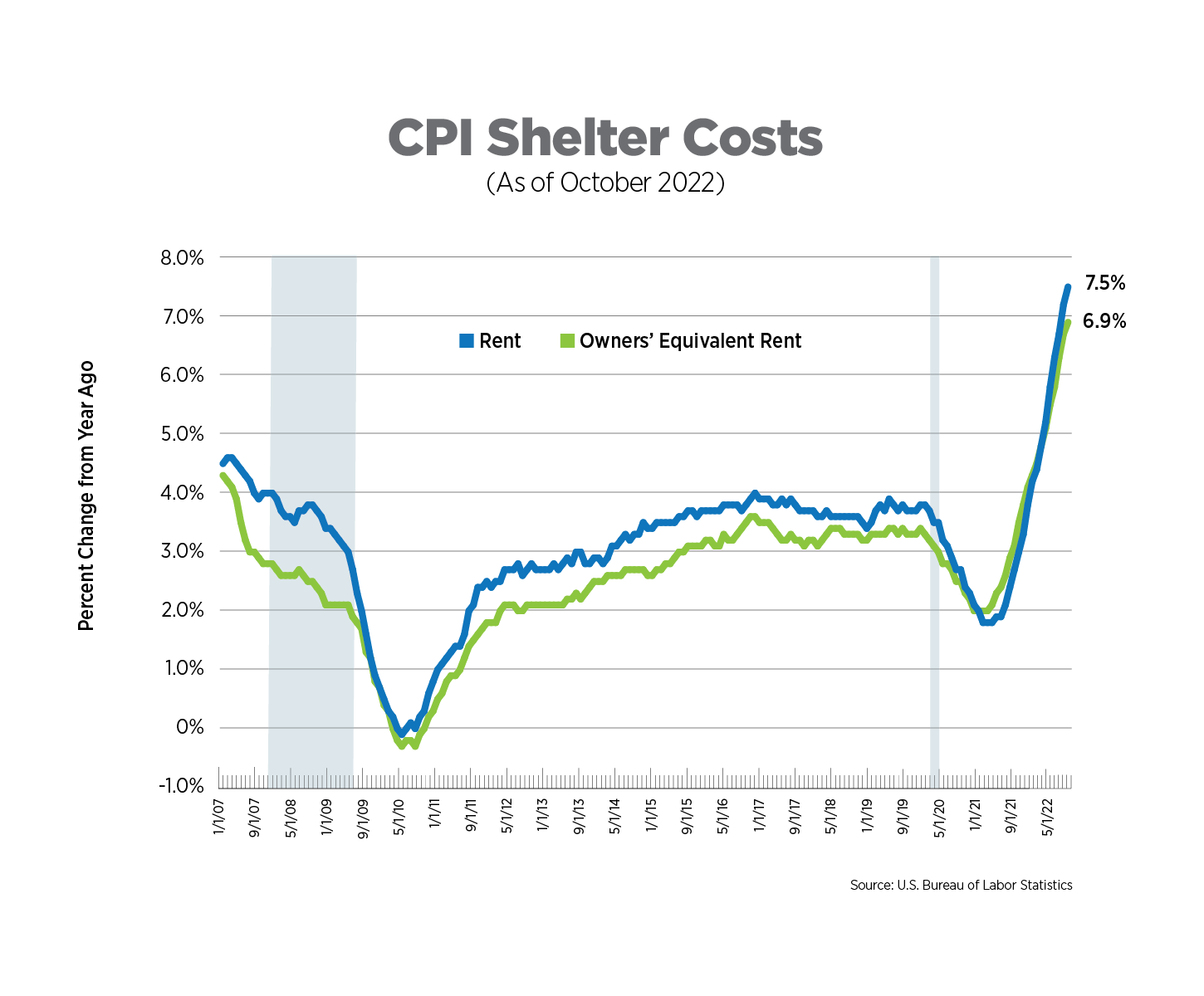 Supply chain pressures are just one cause of persistent inflation. The Federal Reserve Bank of New York created an index to measure stress in the global supply chain, using 27 variables from different countries, including shipping rates and delivery times. A value of zero indicates average conditions in the supply chain.

After peaking in December of 2021 at 4.3, supply chain pressures have eased considerably, falling to a reading of 1.0 in September. There are still some kinks that need to be resolved, but as long as China has a zero-Covid policy, risks of supply chain issues continuing, and even becoming worse again, are weighted to the downside. 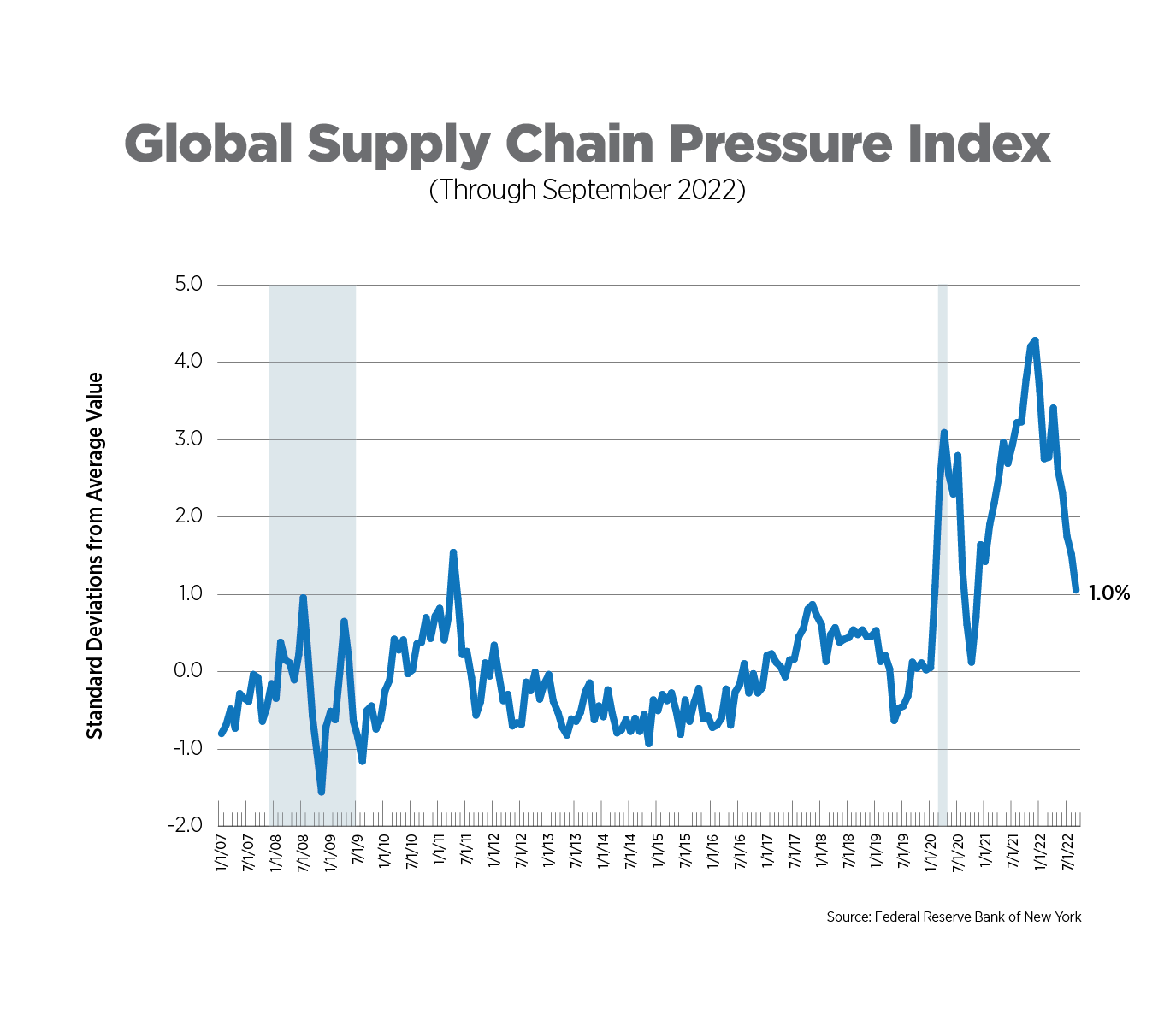 The Fed tracks 21 different measures of inflation expectations. The data presented in the chart below are from the University of Michigan’s Consumer Sentiment Survey, specifically the median expectations for inflation one and five years from now.

The one-year expectation for inflation had declined for three months as gas prices were coming down, but increased to 5.0% again in October, as prices at the pump ticked up. Expectations five years out remain below 3.0%, similar to levels during the Great Recession and a good sign for the Fed that consumers’ longer-term outlooks are within a normal range. 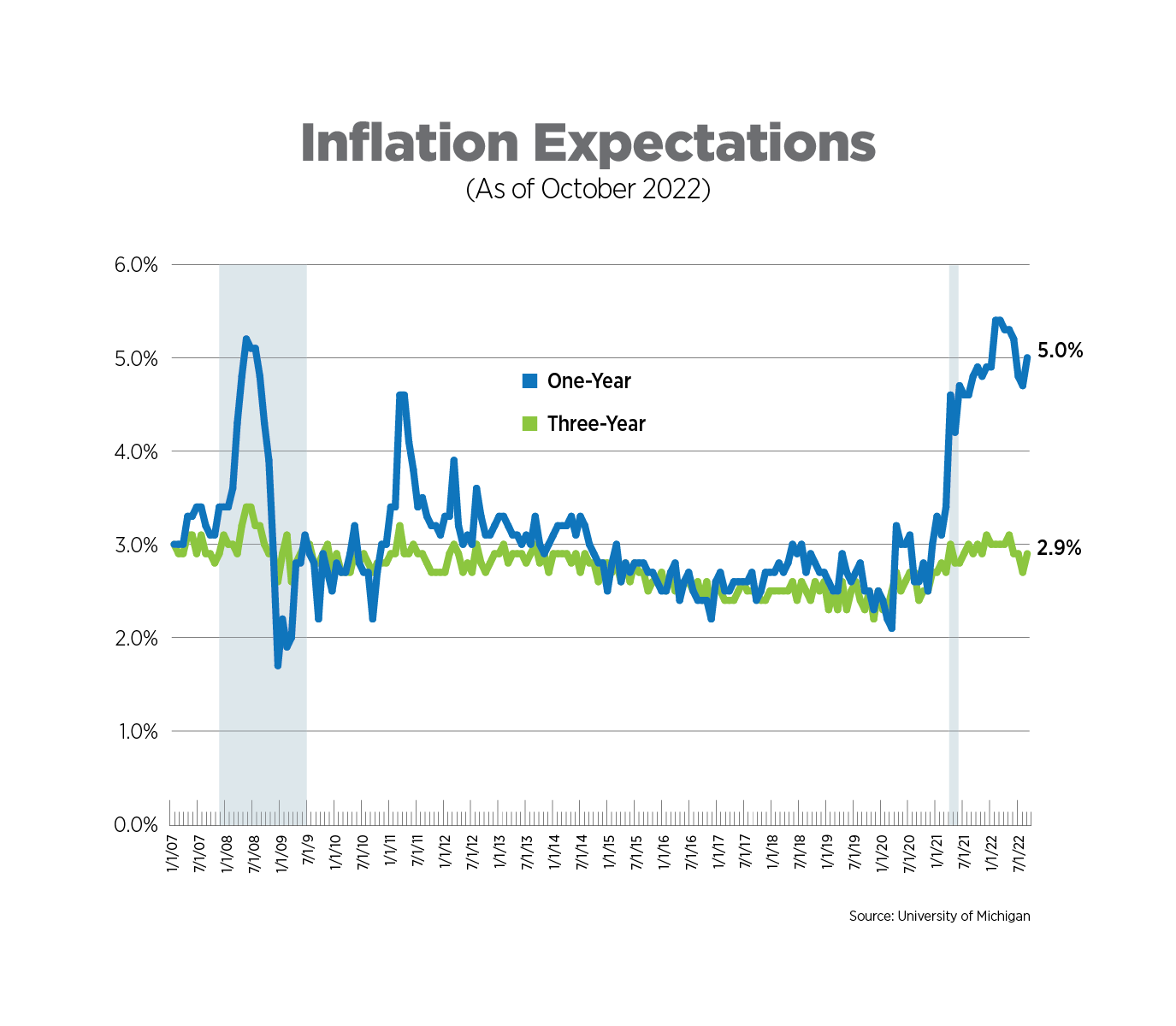 Wage growth has moderated, coming in below 5.0% year-over-year in October for the first time this year. Growth in the Employment Cost Index also declined in Q3 for the first time since the summer of 2020. Wages are moving in the right direction by both measures but remain elevated enough that a wage-price spiral remains a risk heading into 2023.