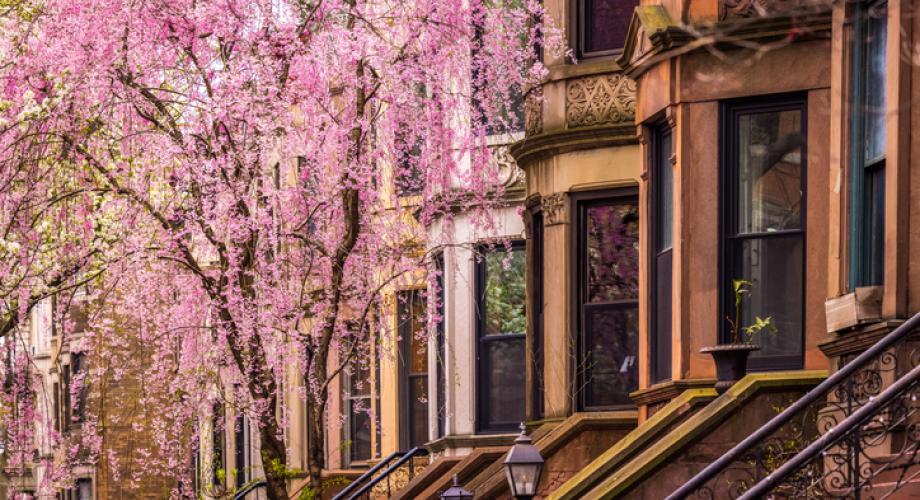 Another Eye-Popping Quarter for Apartments

The apartment market sustained its growth trajectory in the first quarter of 2022 despite inflationary concerns and persistent supply chain pressures. Employment and wage growth further strengthened the need for rental housing, even during the seasonally slow winter months. Powerful demand in conjunction with tightening supply continued to drive record elevated levels for occupancy and rent growth.

RealPage data shows that effective rent averaged $1,671, posting a momentous year-over-year gain of 17.3%. Although rents are historically high, MRI reported that, as of March, leasing traffic was higher than March 2019 figures. Experts predict that rents will continue to rise in the summer before showing signs of a slowdown in the fall and winter.

Sun Belt markets continued to dominate as rent growth leaders. Major companies have been either relocating or expanding to the Sun Belt region seeking to reduce operational expenses and tap into talent pools, which is accelerating demand for housing. According to REIS, Albuquerque, N.M. (27.2%); Phoenix (27.2%); Jacksonville, Fla. (27.1%); Orlando, Fla. (26.9%); and Palm Beach, Fla. (25.7%) led the nation in annual rent growth. Although all markets tracked by REIS recorded rent gains, Lexington, Ky. (4.4%); Minneapolis (6.2%); the District of Columbia (7.1%); Buffalo, N.Y. (7.4%) and Dayton, Ohio (8.1%) saw the slowest growth. 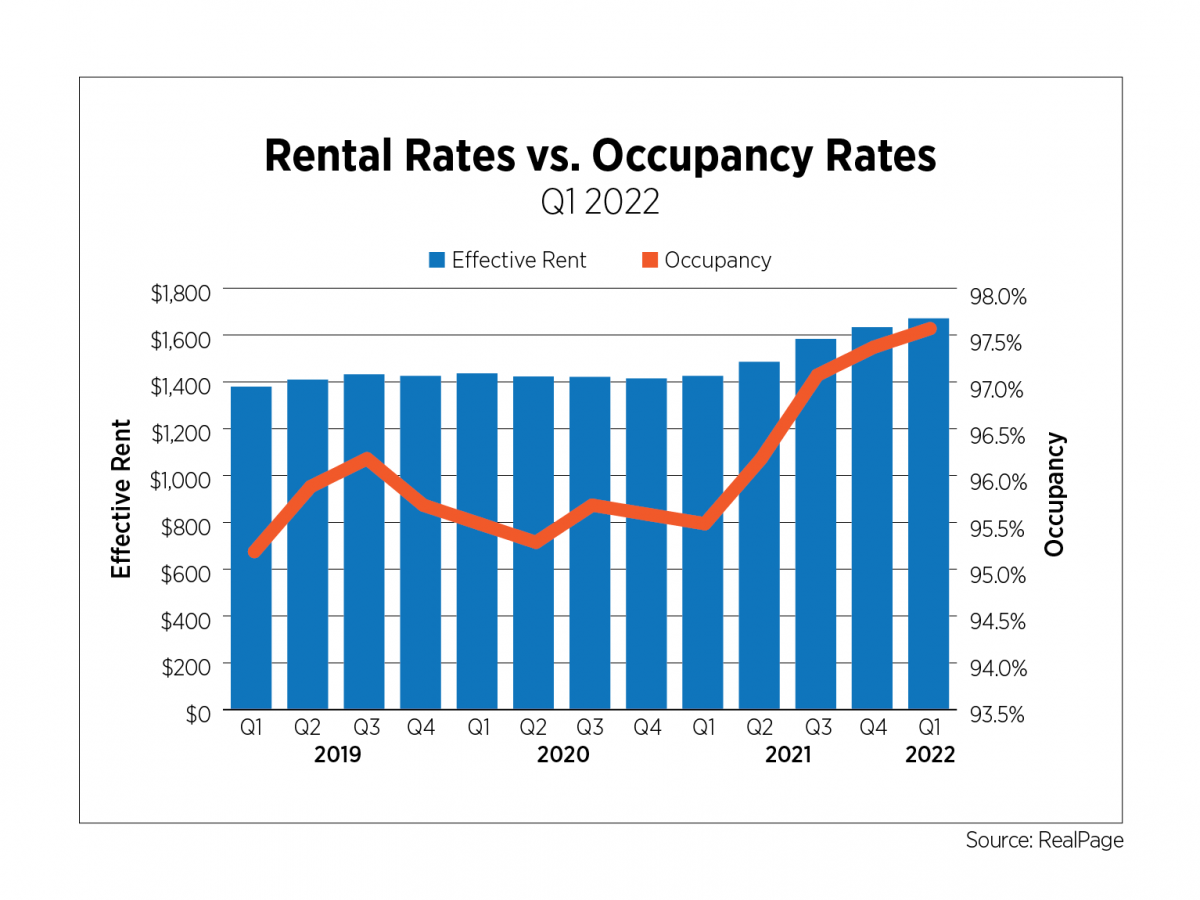 Annual absorption grew to 712,889 units, shattering the previous quarter’s record high and far outpacing the 349,304 units that came online. As the supply and demand imbalance lingers, occupancy recorded a historic rate for the third consecutive quarter, reaching an all-time high of 97.6%.

According to REIS, Chattanooga, Tenn.; Raleigh-Durham, N.C.; Charleston, S.C.; Austin, Texas; and Louisville, Ky., were the strongest markets for occupancy growth since Q1 2021. Chattanooga’s vacancy rate has dropped during the past few quarters, as the market recoups from the effects of the pandemic and the influx of new supply. The markets that saw the largest annual increases in vacancy rates included Dayton; Lexington; Tacoma, Wash.; Palm Beach; Buffalo; and Fairfield County, Conn. 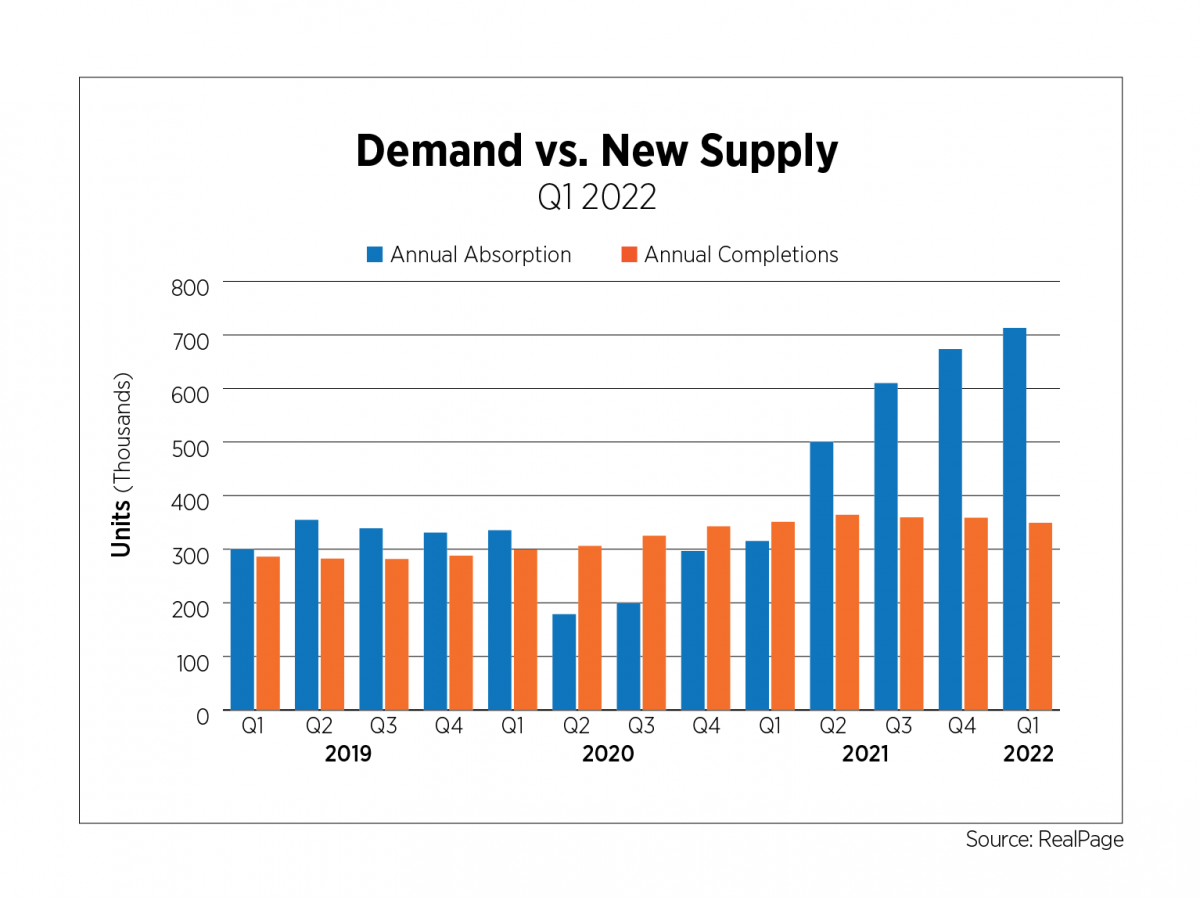 On the construction side, the Census Bureau’s seasonally adjusted annual rate for multifamily building permits in February increased by 12.0% to 597,000 units. The top markets for permits issued year-to-date through February included New York City (6,260 units); Dallas (4,672 units); Houston (3,027 units); Austin (2,880 units); and Seattle (2,746 units). Multifamily construction starts amounted to 501,000 units, increasing 37.3% compared to February 2021. Completed units declined 16.9% to 266,000 units. Apartment construction will be sluggish for the remainder of 2022 due to labor market challenges in the construction industry as well as rising oil, gas and energy prices if the Russian invasion of Ukraine continues. 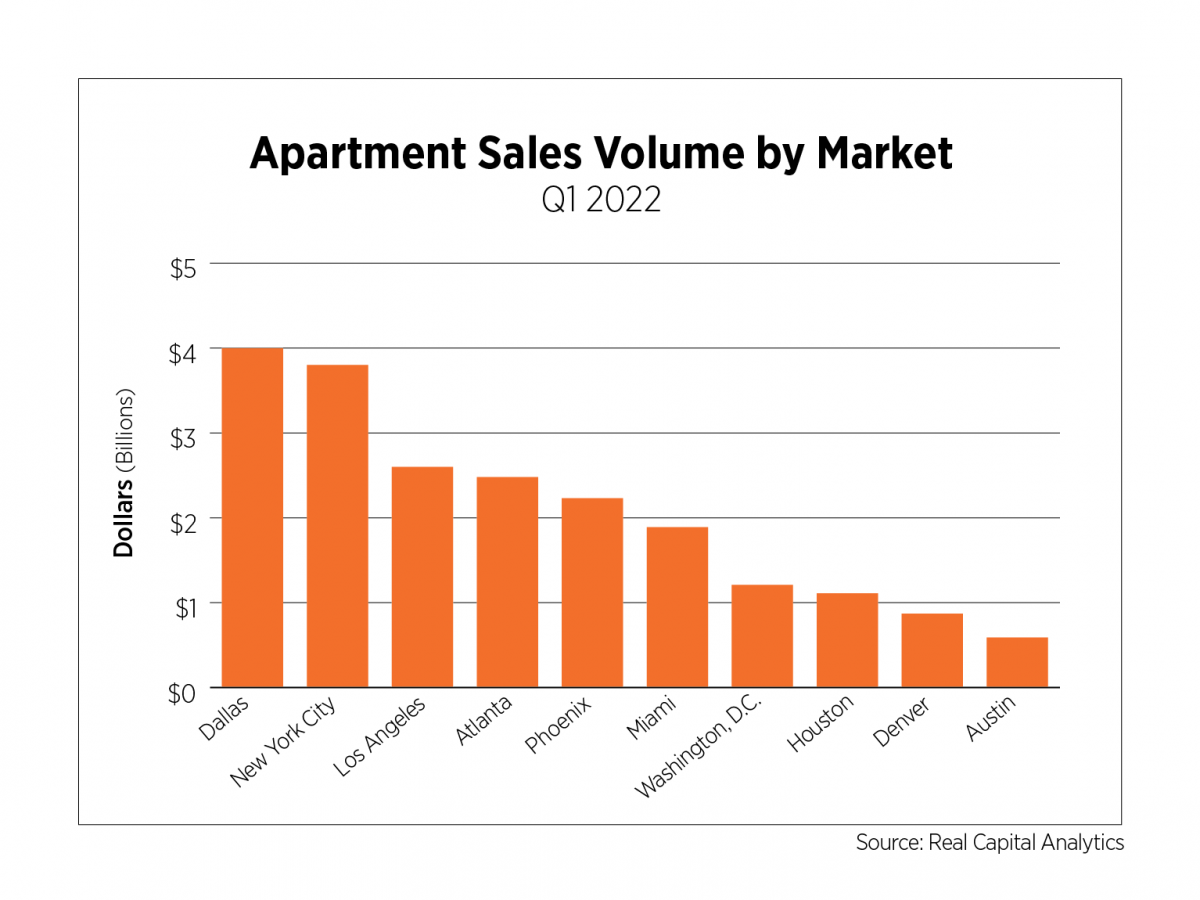 Comparable to the rental housing industry, the build-to-rent sector saw muted construction activity. Both under construction and completed units declined year-over-year. However, John Burns Real Estate Consulting reported that BTR developers are actively buying land across the country, most notably in Southeast and Southwest markets. 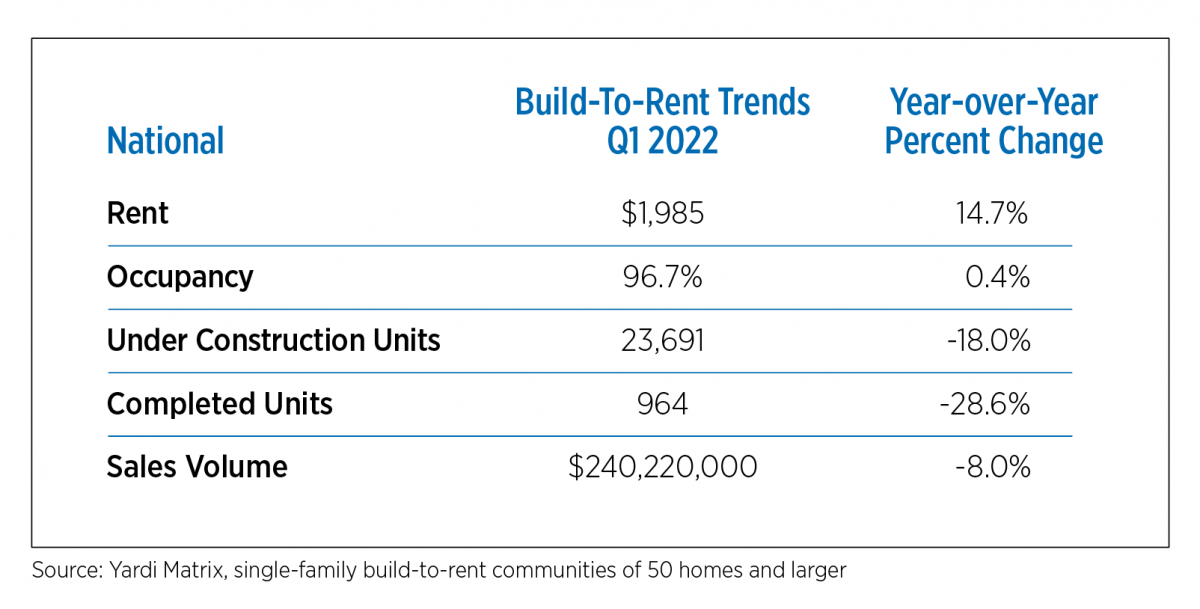 High inflation overshadowed a booming job market, soaring corporate profits and consumers flush with cash. Russia’s war with Ukraine, the ongoing pandemic and stock market volatility exacerbated waning consumer and business confidence. The U.S. added 431,000 jobs in March while the unemployment rate fell to its lowest point during the pandemic, 3.6%, just one-tenth of a percentage point shy of the February 2020 rate. Through the first quarter, job gains averaged 562,000 per month, matching last year’s monthly averages. Initial claims for unemployment for the week ending April 2 totaled just 166,000, the lowest level since 1968. And in yet another positive indicator for the labor market, the number of job openings for every unemployed person recently hit its all-time high and currently stands at 1.8.

There is still some room for improvement in the labor market, as jobs are down 1.6 million from pre-pandemic levels (6 million if accounting for what would have been average rates of growth in 2020 and 2021) and the labor force participation rate remained one full percentage point below February 2020. It is unlikely the participation rate will return to that level in the near future given retirements and other shifts in demographics.

The February Small Business Optimism Index published by the National Federation of Independent Businesses (NFIB) dropped to its lowest level since January 2021, during a COVID surge and prior to widespread vaccine adoption. Twenty-six percent of businesses reported that inflation was their most important problem right now, the highest level since 1981 and topping any labor market issues. The index component measuring expectations for business conditions dropped two points to a net -35%, which measures the percent of respondents who think conditions will be better minus the percent who think conditions will be worse six months from now.

Two widely cited surveys of consumer sentiment are the Conference Board’s Consumer Confidence Index and the University of Michigan’s Index of Consumer Sentiment. These are important measures in gauging future economic growth as confidence impacts consumer spending, which makes up more than two-thirds of GDP. While both surveys typically move in the same direction, there have been periods of significant divergence as illustrated in the chart below. The most recent data show a downward trend for both indices, generally starting with the delta variant in summer 2021 and then overtaken by inflation concerns. The Conference Board’s measure (whose methodology changed last year) has not come close to readings during the Great Recession while the University of Michigan Index is flirting with those same low levels. 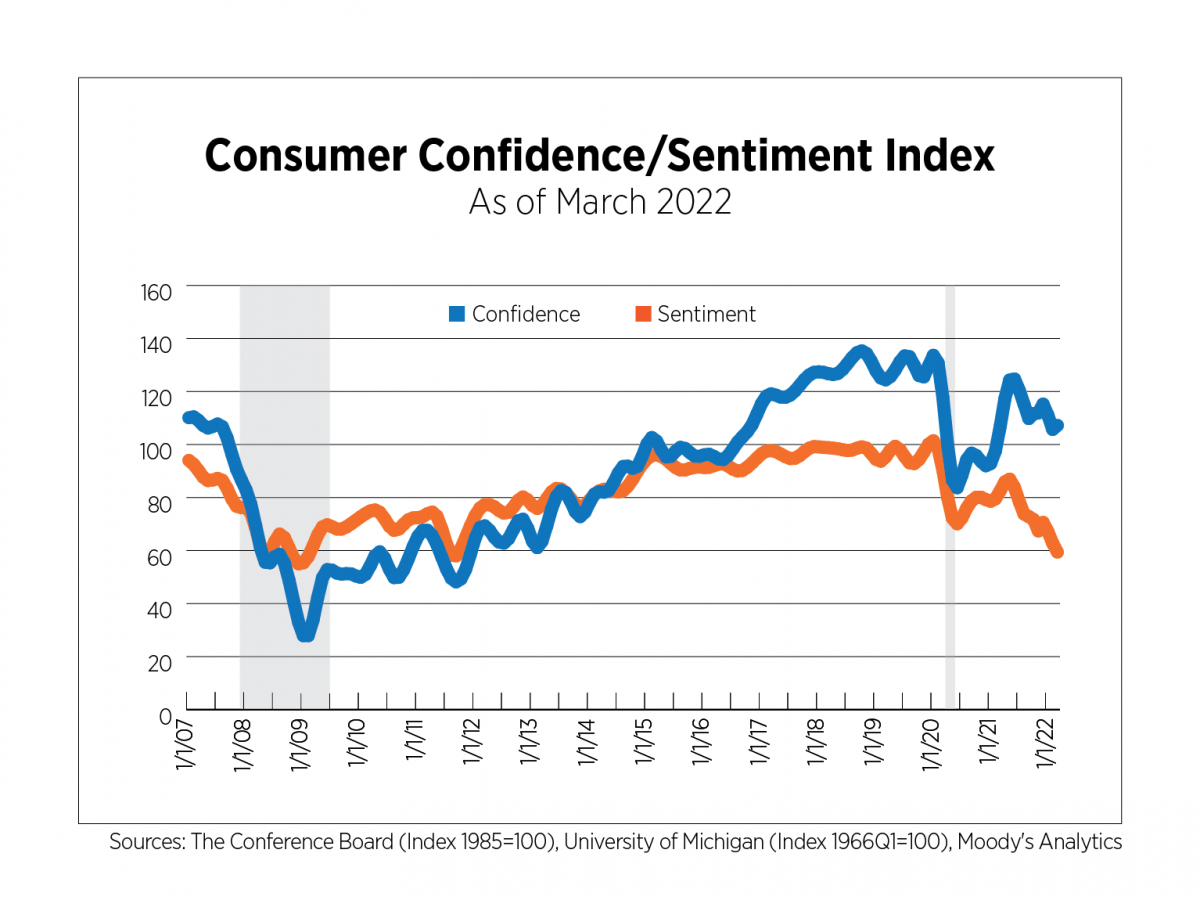 The University of Michigan’s survey calculates a separate index for inflation expectations. The March reading for the inflation outlook one year from now was 5.4%, the highest level since 1981. The 5-Year, 5-Year forward measure is based on 10-year and 5-year nominal and inflation-adjusted Treasury securities and indicates the expected level of inflation five years from now. The March average for this measure, 2.3%, was closer to long-term averages, within the Federal Reserve’s target range and was not yet raising a red flag. 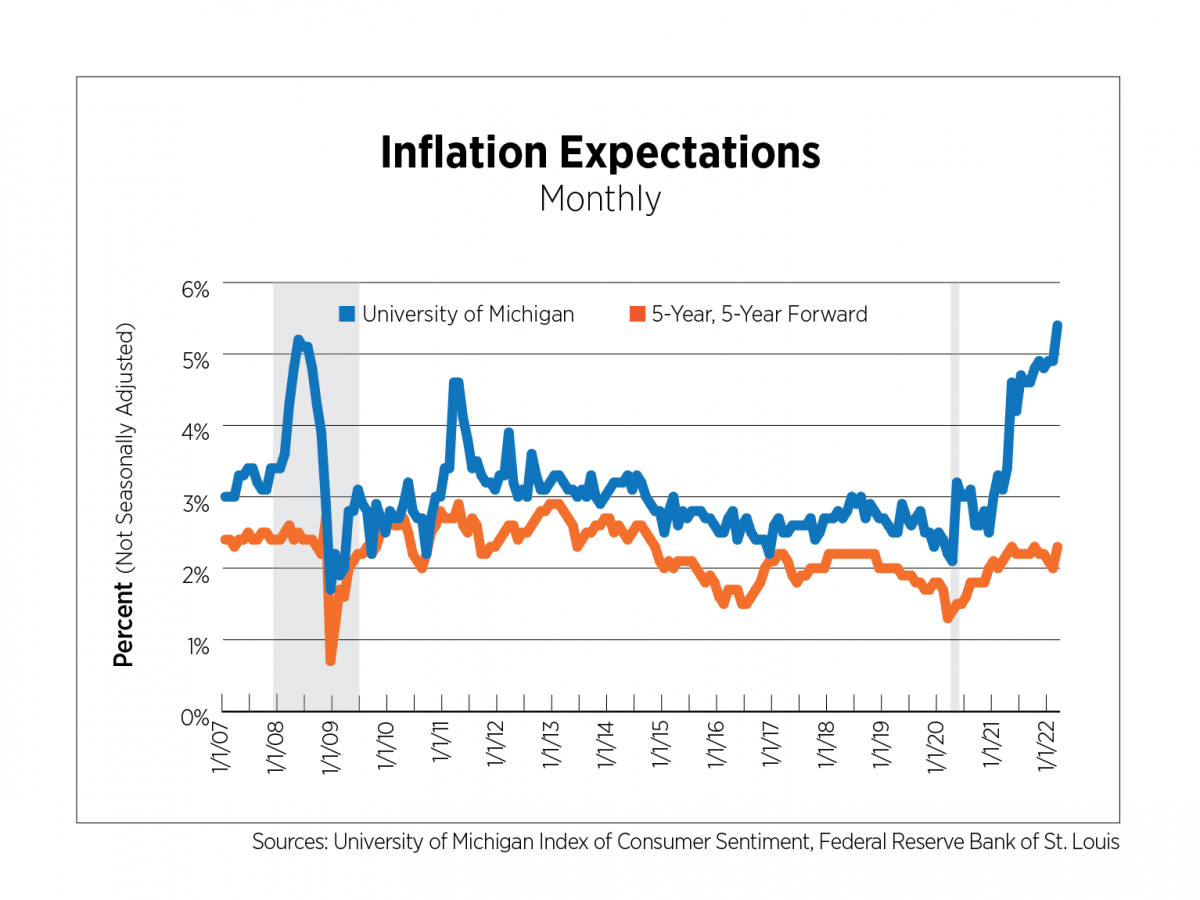 Odds of another recession are once again being debated among economists and analysts, particularly after the recent inversion of the yield curve, albeit brief, a notable precursor to most recessions. Several Fed governors and Open Market Committee members have indicated that the Fed will begin more aggressive action to combat inflation, starting at its May meeting. This not only means raising interest rates by more than a quarter point, but rapidly reducing its balance sheet.

Should the U.S fall into another recession, it will likely be mild and wouldn’t occur until the latter part of 2023. The rental housing industry experienced record growth in 2021 and continued its stellar performance into 2022. These strong fundamentals and favorable demographic trends mean it is poised to withstand a potential economic downturn. But at the moment, the strength of the labor market as well as GDP growth should help quell recessionary concerns.