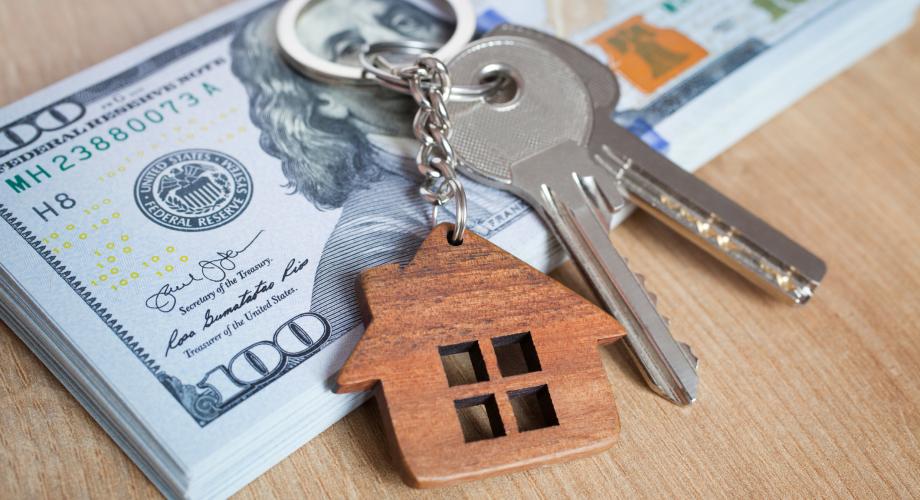 While inflation was red-hot during the second quarter, the apartment industry showed signs of cooling. Demand for apartments dulled as Americans fear a recession is on the horizon due to highly elevated inflation, rising interest rates, supply chain challenges and Russia’s war on Ukraine. Although the apartment market decelerated, the sector remains solid and is expected to withstand the next economic downturn as it did during the pandemic.

As reported by RealPage, effective rent increased by 16.9% since Q1 2021 to $1,736. However, the pace of rent growth slowed compared to the previous quarter. The booming labor market and limited supply continue to bolster rent growth. 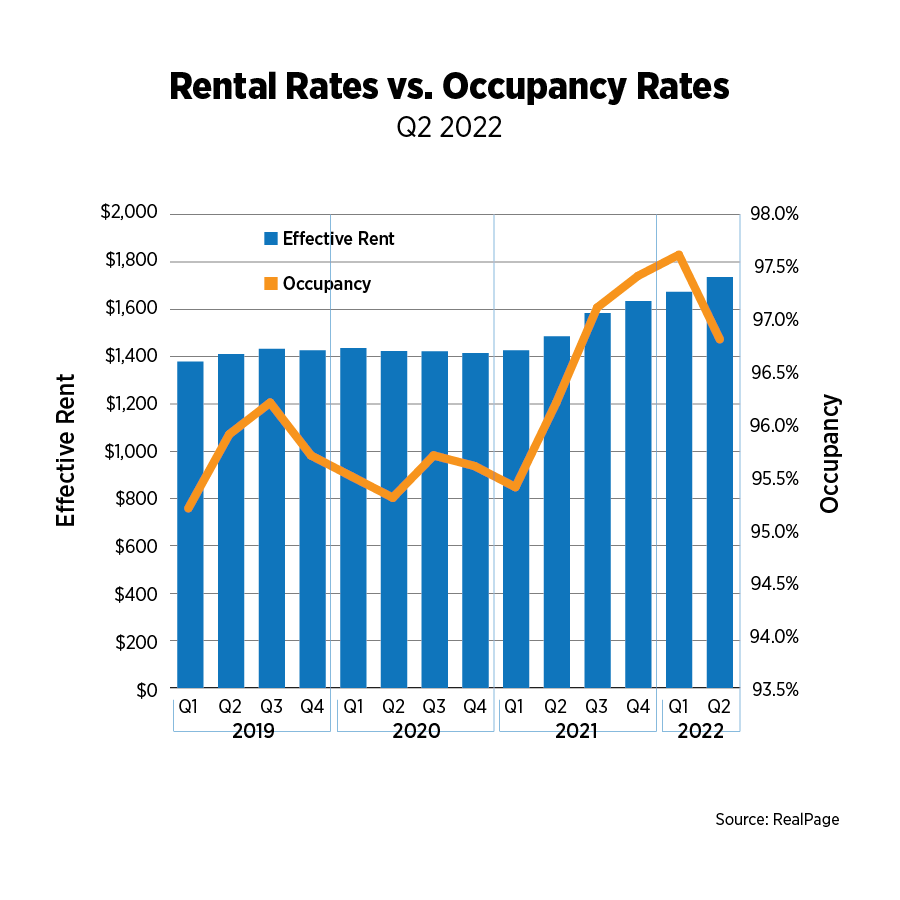 After three consecutive quarters of record-breaking demand, annual absorption shrunk to 432,928 units, the lowest rate since the same time last year. Although demand weakened, it still exceeded the 337,902 units that were delivered. As a result of lessened demand, the national occupancy rate dropped 0.8 percentage points to 96.8%.

While Americans have experienced the strongest wage growth in decades, inflation has overpowered pay gains. Further, the Federal Reserve’s response to surging inflation has weakened consumer spending power. New household formation could momentarily stall as potential renters move in with family members or find roommates to cut costs. On the other hand, prospective homebuyers who are being shut out of the market due to rising mortgage rates may decide to rent. The National Association of REALTORS® reported that existing-home sales declined 5.4% month-to-month in June, marking the fifth monthly deceleration. 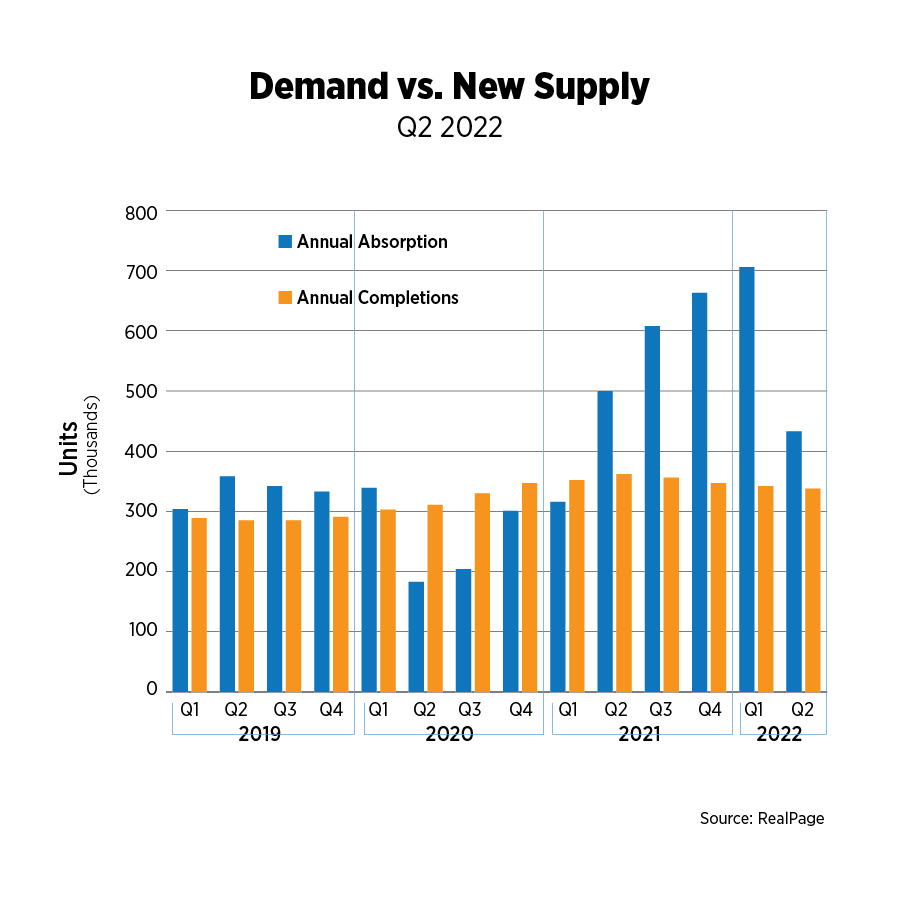 According to the U.S. Census Bureau, the seasonally adjusted annual rate for multifamily building permits jumped 27.8% year-over-year to 666,000 units in June. Construction starts amounted to 568,000 units, an increase of 16.4%. Units completed slowed 3.7% to 366,000 units, indicating construction challenges due to increased material and labor costs as well as rising interest rates.

The apartment sector persisted to be a stable investment and the top-performing sector. Deal activity during the second quarter improved by 29.0% to $75.8 billion despite increased borrowing costs. According to Real Capital Analytics, the U.S. average price per unit stood at $249,568, an annual growth of 32.4%. Considering recent record-setting rent growth, apartment owners interested in selling have not reduced asking prices amid elevated interest rates. Investors exchanged nearly 250,000 units, with cap rates averaging 4.4%, down 60 basis points annually. Property bottom lines that have improved due to rent growth are still expected to give cap rates more stability in a rising interest rate environment. 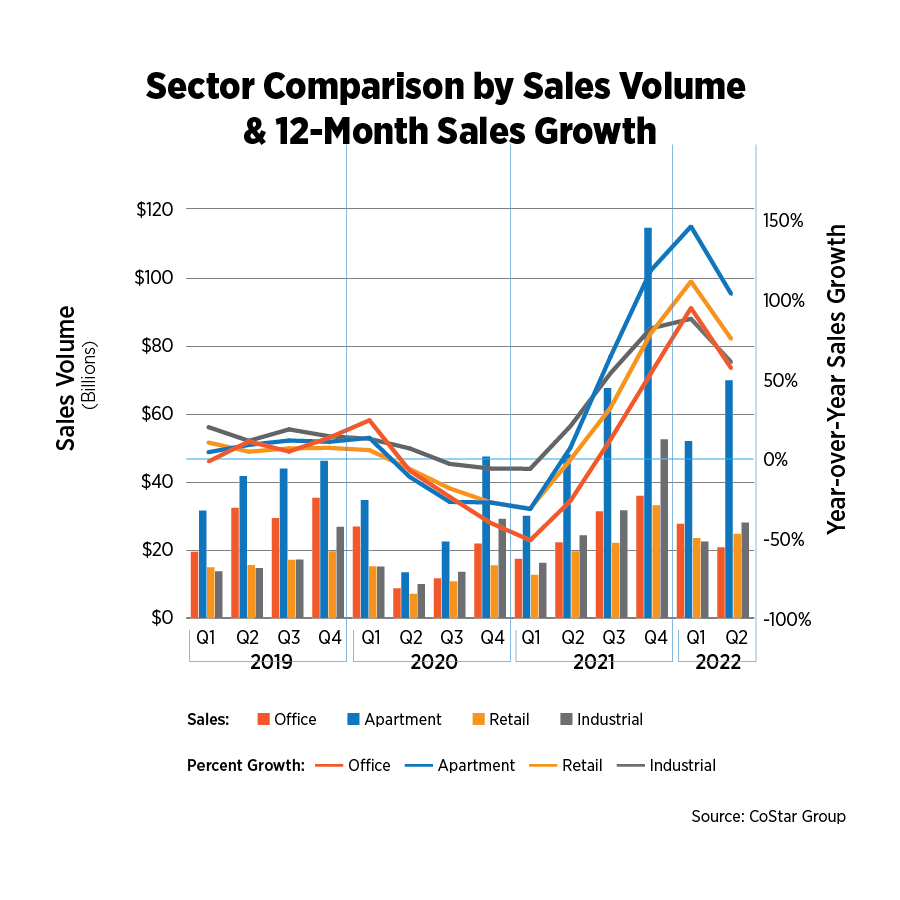 U.S. build-to-rent (BTR) rent growth remained at high levels in Q2 2022, posting a 13.1% increase since the same time last year. Like the apartment market, the built-to-rent sector continued to benefit from a healthy job market and Americans priced out of homeownership. Of the markets tracked by Yardi Matrix with 100 or more units, Orlando (48.2%), Knoxville, Tenn. (35.9%), Miami (33.3%), suburban Atlanta (33.2%) and Jacksonville (31.5%) saw the highest annual rent growth.

The build-to-rent capital market showed signs of stabilization with slowed year-over-year sales volume. Compared to the feverish deal activity seen in Q1 2021, closed transactions were down 69.2% totaling $170 million. As BTR construction expands and capital flows into the sector, investment activity is expected to be solid for the remainder of 2022. 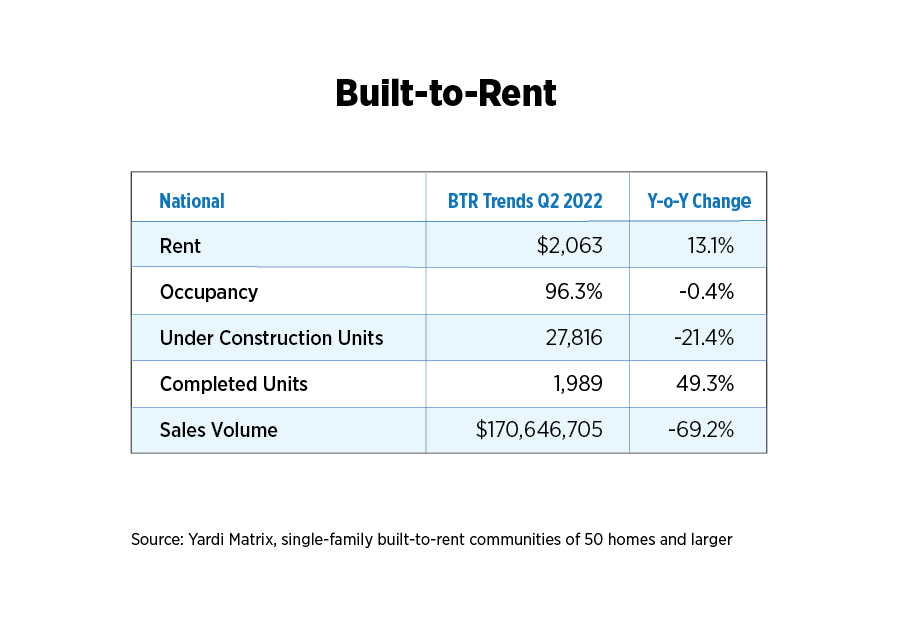 Recession fears grew throughout the second quarter, starting with the release of the first estimate of first quarter GDP at the end of April, which revealed a contraction. The final estimate measured a 1.6% decline in the total value of goods and services in the U.S. economy. Subsequently, the Atlanta Fed’s GDPNow tracker for Q2 2022 slipped into negative territory at the end of June due to several data releases revealing weakened fundamentals. This would infer a recession, based on the traditional characterization of two consecutive quarters of negative growth. However, the National Bureau of Economic Researcher (NBER), which is responsible for dating business cycles in the U.S., defines a recession as “a significant decline in economic activity that is spread across the economy and lasts more than a few months.” The Bureau also considers several other economic variables: Real personal income minus transfer payments; real personal consumption expenditures; wholesale-retail sales adjusted for price changes; industrial production; nonfarm payroll employment; and household survey employment. 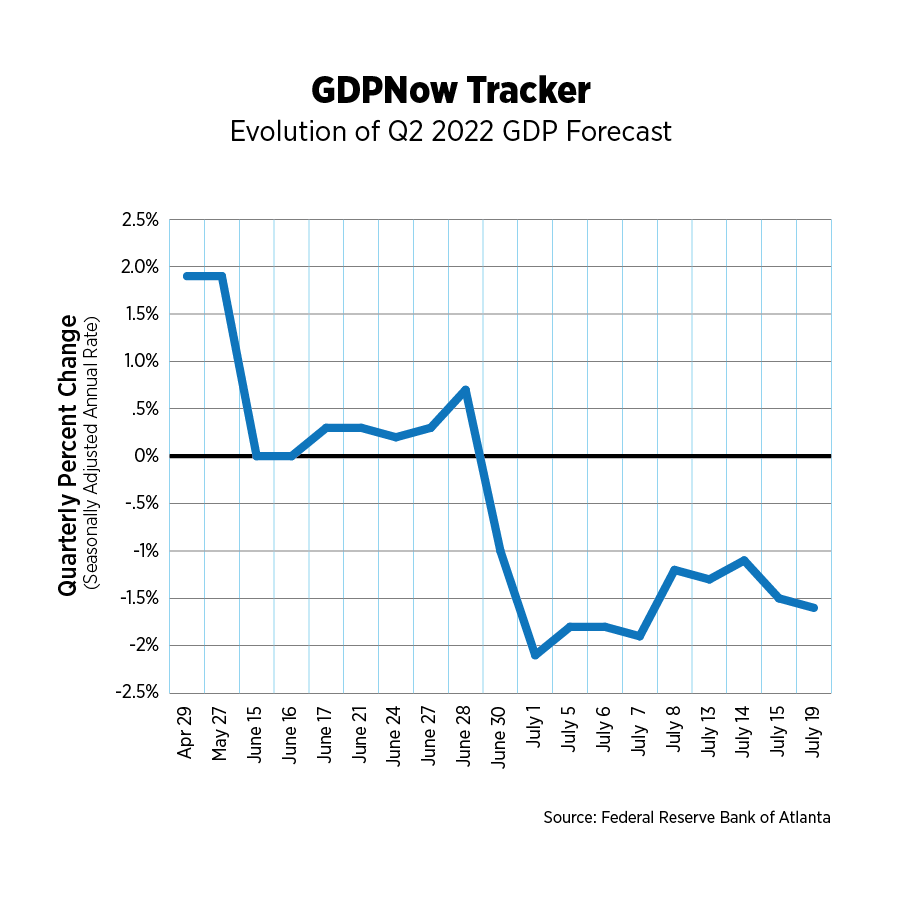 There are indications that labor market strength might be moderating, but it is in no way raising red flags in terms of a recession. The jobs report for June showed a considerable growth of 372,000 jobs, beating analysts’ expectations. Job openings remain at near-record levels, layoffs are well below pre-pandemic levels, initial claims for unemployment are in line with long-term averages and wage growth remains strong, if not record-breaking.

Monthly job growth has averaged 457,000 thus far in 2022. All major sectors are witnessing job growth in 2022 with trade/transportation/utilities adding 583,000 jobs (2.1%), leisure/hospitality adding 560,000 jobs (3.7%) and professional/business services adding 452,000 jobs (2.1%). The government sector grew just 0.3%, adding 74,000 jobs. Federal government jobs, which ramped up during the pandemic, have now shrunk below pre-pandemic levels while local governments continued to add to their payrolls, which have increased by 0.6% this year, or about 81,000 new jobs. 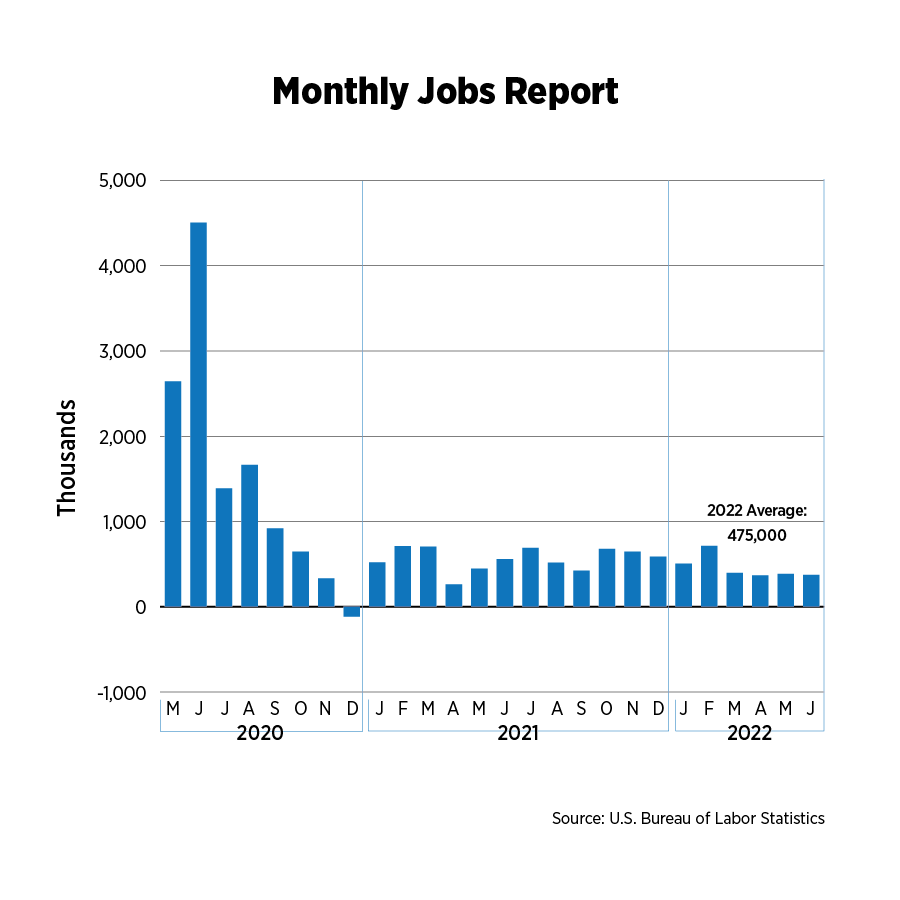 Inflation stayed stubbornly high, averaging 8.6% in the second quarter and reaching another 40+-year high in June at 9.1% year-over-year. Prices increased 1.3% on a monthly basis, with energy prices comprising nearly half the increase. With gas prices trending downward, energy sector price pressures are poised to ease somewhat in the coming months.

Core inflation (excluding food and energy) may be showing signs of moderating but remained highly elevated, driven by new vehicles, used cars and trucks and shelter costs. The CPI measure for rent rose 5.8% year-over-year, the highest rate of increase since 1986.

In addition to the strong labor market, other positive economic indicators include healthy personal income growth, a contraction in the trade deficit, some improvement in supply chains and strong retail sales, even allowing for inflationary factors. Still, consumers and businesses alike remain sour on the economy, with the University of Michigan’s Index of Consumer Sentiment plummeting to 51.1 in July, the lowest level on record, and the National Federation of Independent Businesses’ Small Business Optimism Index dropping to 89.5, lower than during the depths of the pandemic.

Along with lowering GDP forecasts, economists and analysts have raised the odds of recession, although that doesn’t necessarily mean recession is included in baseline forecasts. Moody’s Analytics, for example, raised recession odds to 40% during the next 12 months and 50% over the next 24 months, but will only incorporate a recession in the forecast model if the probability is two-thirds or higher.

As long as job growth remains strong, the apartment industry can expect to generate more demand. And even though the for-sale housing market appears to be slowing, pricing continues to surge as mortgage rates rise. A recent report from Realtor.com showed it was cheaper to rent than buy in 38 of the 50 largest metros. But steady demand doesn’t mean the industry won’t have its challenges. Persistent inflation – for goods, services and personnel costs – and rising interest rates amid moderating rent growth suggest lower NOI growth and the need for more careful scrutiny of acquisitions, development and capital expenditures.